When you choose to lay ash flooring in your home, you are making a statement from a few different vantage points. Most obvious are the aesthetic implications: its bright, sunny character and subtle swirling patterns suggest, “come in and make yourself comfortable.”

Ash also implies ruggedness: its density and robust strength invites a pounding while you smile and say, “bring it on.”

Lastly, due to its imperiled status at the hands of the destructive Emerald Ash Borer beetle, walking each day on a wide-plank ash floor signifies honoring the essence and posterity of this mighty and beautiful tree. Is Ash the Right Choice for Me and My Home?

One cannot discuss the ash tree without recognizing the challenges this species faces. The invasive Emerald Ash Borer was inadvertently introduced in North America from Asia. Lacking natural predators, the beetle has proliferated. Its larvae bore into ash trees and feed on the inner bark, which eventually kills the tree. The devastation the beetles have caused is widespread.

Some people may be hesitant to utilize ash trees as a result. But Vermont Plank Flooring works with FSC-certified woodlot owners who selectively cut still-healthy ashes in the path of the invasion. By doing so, we are rescuing trees from obsolescence and providing them the opportunity of an enduring use.

What Size Ash Planks are Available?

The white ash, from which most ash flooring comes, grows natively in the eastern United States. When mature, it reaches between 65 and 100 feet in height and up to five feet in diameter, allowing Vermont Plank Flooring to produce spectacular planks up to 13 inches wide and 14 feet long—two to three times the industry standard. Boards that wide and long result in fewer seams between them and a continuity that feels expansive and spacious.

Tell Me About Ash’s Renowned Durability

Envision the impact of a major league slugger’s hardest swing making contact with a 100-mile-per-hour fastball. Baseball bats are most often made of ash for good reason—they can handle the force of that collision again and again and again, with no discernable visual or structural effect.

Ash is a relatively dense, highly shock resistant, resilient wood. Its strength relative to its weight is excellent. It also possesses a unique elasticity. These factors make it ideal not only for baseball bats but for archery bows and tool handles as well.

In the context of hardwood flooring, ash has a hardness comparable with red oak, and slightly less than that of maple. Along with its impressive shock resistance, ash will fend off potential dents, dings, and scratches—and just about any other abuse you can imagine—with ease, and provide you with like-new flooring for decades to come.

Ash’s rich character stems from its striking grain patterns and coloration. Its coarse grain is similar to white oak, typically straight-grained with occasional moderate swirls, figures, and knots. Its colorings, however, differ from oak. Its heartwood varies between grey, creamy light brown, and pale yellow, sometimes streaked with medium brown. The sapwood, which will vary in degree depending on the region in which the trees grew, can be wide and quite light—a gentle beige to almost white—with a sometimes-unclear demarcation from the heartwood. These variations result in a striking glow and richness that brightens any room.

Ash accepts stains with gracious ease, providing the opportunity to customize your flooring further to tie in with your home’s décor, to neutralize the wood’s natural variations for a more uniform look, or to allow its natural beauty to shine through. Vermont Plank Flooring’s custom finish shop can work with you to determine how to best achieve your desired aesthetic approach. Ash’s sunny, resonant character in consort with our grade and finish options provide the flexibility to utilize ash in a variety of situations, from traditional homes to casual rural settings, to upscale urban apartments.

In What Rooms in My Home is Ash Flooring Best Suited?

Just as the ash baseball bat works equally well for the bunt, the bloop single, or the towering home run, ash flooring is similarly versatile. It has the grace, strength, and character to be equally at home in the most public areas, heavily trafficked utility zones, and quiet out-of-the-way spaces. Its aesthetic allure makes it a natural for living rooms, dining rooms, and family rooms. Its brightness and wide plank luxury are ideal for bedrooms large and small. And its toughness is ideal for busy kitchens, hallways, and stairways.

Ash’s week spot is with moisture and water. When confronted with these elements, ash does not hold its own. As a result, we recommend our engineered wide plank ash for bathrooms, basements, or anywhere below grade, or for application directly on concrete. 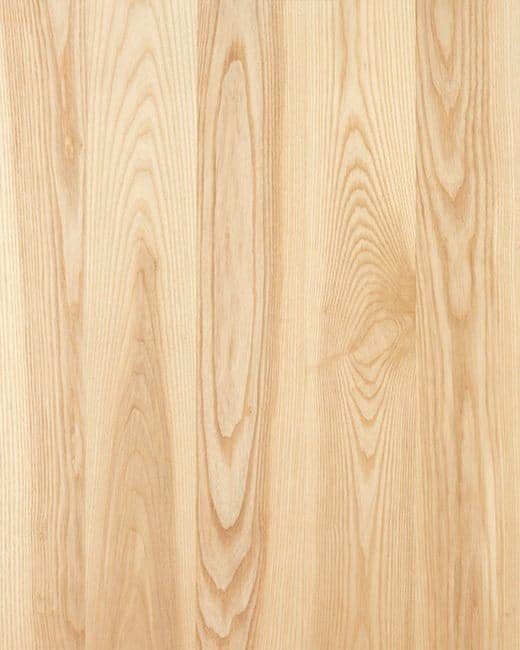 Would you like a wide plank Ash floor in your home?

Or, simply request a sample or quote.

Send me a sample or quote